BOBBY BONES INVITES FANS TO ATTEND THE FIRST EVER THE BOBBY BONES SHOW, LIVE FROM THE RYMAN JUNE 8 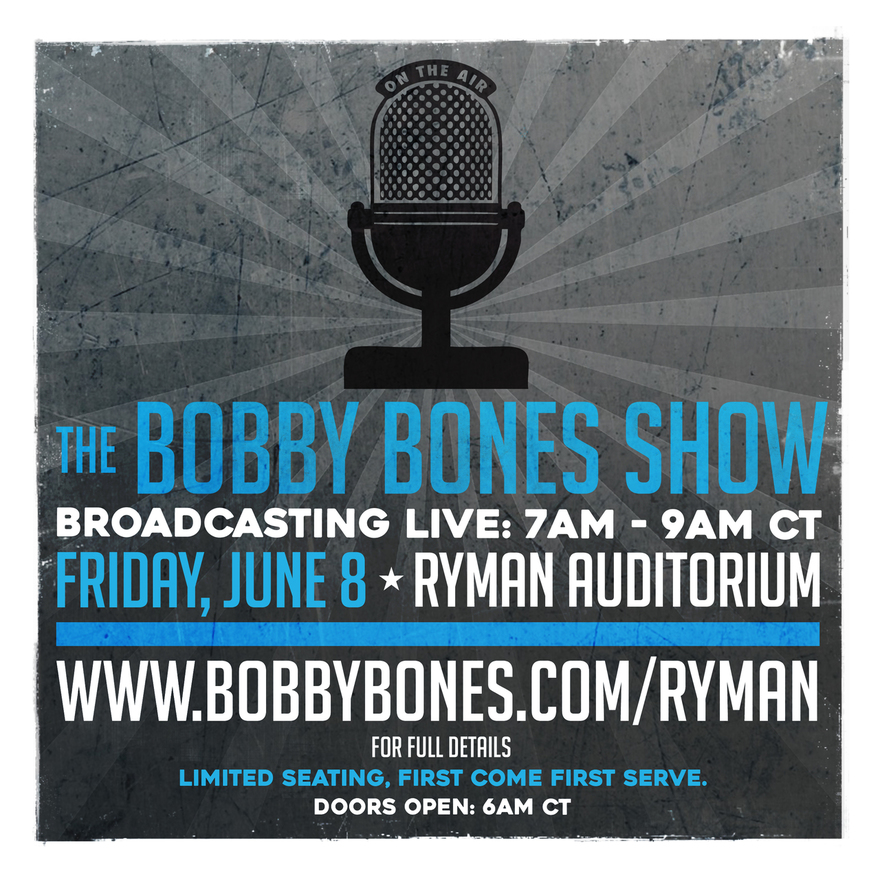 BOBBY BONES INVITES FANS TO ATTEND THE FIRST EVER
THE BOBBY BONES SHOW, LIVE FROM THE RYMAN JUNE 8

PLANS FOR MULTI-CITY BOOK TOUR REVEALED LEADING UP TO THE RELEASE OF “FAIL UNTIL YOU DON’T: FIGHT. GRIND. REPEAT.”JUNE 19

Nashville, TN – May 30, 2018 – iHeartMedia’s Bobby Bones and the cast of The Bobby Bones Show are moving out of the studio for one day only for the inaugural The Bobby Bones Show, Live From the Ryman on Fri., June 8. For the first time ever, Bones is inviting fans to join in for a live broadcast of the award-winning morning show at Nashville’s historic Ryman Auditorium amidst CMA Fest, set to feature Chris Janson, Kassi Ashton, American Idol 2018 winner Maddie Poppe and American Idol runner-up Caleb Lee Hutchinson. There will be a special pop-up shop onsite where fans will be able to pre-order Bones’ new book, “FAIL UNTIL YOU DON’T: FIGHT. GRIND. REPEAT.” (Dey Street Books), via Parnassus Books as well as other exclusive items. The LIVE broadcast begins at 7:00 am Friday, June 8, with doors opening at 6:00am. For more information on this free event go to www.BobbyBones.com/Ryman for full details. Seating is limited and available on a first come, first served basis.

Fans will also have a chance to catch Bones in cities across the country in support of his upcoming “FAIL UNTIL YOU DON’T: FIGHT. GRIND. REPEAT.” (Dey Street Books), set to hit shelves June 19.  Launching June 15 in Charleston, SC, Bones will visit Washington DC, Boston, MA, Tampa FL, Ft. Pierce, FL, Austin, TX and Wichita, KS for special pre-order, signing and live-stream events, including a stop at the iHeart Theater in New York, NY, and starting this Friday, 6/1 fans can sign up to attend the event at www.BobbyBones.com/NYC. See below for additional information on the BOBBY BONES BOOK TOUR, or visitwww.FightGrindRepeat.com/Tour.

“FAIL UNTIL YOU DON’T: FIGHT. GRIND. REPEAT” is the follow up to Bones’ #1 New York Times best-selling memoir “BARE BONES: I’M NOT LONELY IF YOU’RE READING THIS BOOK.” and hit #1 on Amazon upon becoming available for pre-order. An inspirational and humorous collection of stories about Bones’ biggest misses in life and how he turned them into lessons and wins, Bones shares ideas and motivations for finding success even when seemingly surrounded by impossible odds or tough failures. The book also features anecdotes from some of his famous friends who open up about their own missteps, including Brooklyn Decker, Charlamagne Tha God, Andy Roddick, Chris Stapleton and more.

6/18 – LIVE STREAM BOOK SIGNING
www.BobbyBones.com, 5PM/ET
Bobby will do a live book signing where he will answer your questions in live time and sign copies of the book for anyone who orders during the event.

6/19 – NEW YORK, NY
iHeartRadio Theater Show, 7PM/ET w/ Special Musical Guest
Bobby will discuss his new book in front of a live audience at the famed iHeartRadio Theater in New York. He will also answer questions and give you a behind-the-scenes look at what went into creating and writing this new book. Also featuring a special musical guest! You can live stream the whole event at BobbyBones.com/NYC. Information on your chance to get into the iHeartRadio Theater will be posted on the site on Friday, June 1.

6/20 – WASHINGTON DC
Barnes & Noble, 6PM/ET
20427 Exchange St, Ashburn, VA 20147
BOOK SIGNING
Note: you MUST purchase a copy of the book from Barnes & Noble on-site in order to qualify to enter the meet and greet line.

6/27 – AUSTIN, TX
Barnes & Noble, 7PM/CT
1000 Research Blvd, Austin, TX 78759
BOOK SIGNING
Note: you MUST purchase a copy of the book from Barnes & Noble on-site in order to qualify to enter the meet and greet line

Dubbed “The most powerful man in country music” (Forbes), Bobby Bones’ nationally syndicated radio show The Bobby Bones Show reaches millions of listeners on more than 100+ stations and recently garnered its third ACM Award for National On-Air Personality of the Year, also earning a 2017 Country Music Association award for National Broadcast Personality of the Year. With a knack for recognizing and launching new talent on his “triumphant” (Billboard) The Bobby Bones Show, Bones brought his musical mastery to this season of ABC’s American Idol. His popular podcast, BobbyCast, a “treasure trove of unusually candid anecdotes…” (Washington Post), has surpassed 100 episodes and has been downloaded more than 2 million times. The podcast’s overwhelming success has paved the way for Bones to launch the Nashville Podcast Network, an eclectic collection of seven podcasts from a variety of Nashville-savvy hosts, giving listeners an inside look at the lifestyle and pop culture in Nashville.