BROOKS & DUNN RETURNS TO NO. ONE ON THE BILLBOARD COUNTRY ALBUMS CHART WITH “HIGH-OCTANE” REBOOT 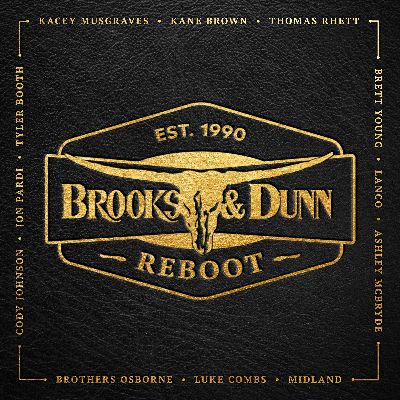 BROOKS & DUNN RETURNS TO NO. ONE ON THE BILLBOARD COUNTRY ALBUMS CHART WITH “HIGH-OCTANE” REBOOT

Nashville, TN – April 15, 2019 – The best-selling duo of all time, Brooks & Dunn, debuts at No. One this week on Billboard’s Top Country Albums chart with their collaboration project REBOOT. Proving “the timing couldn’t be better to celebrate the influence of Ronnie Dunn and Kix Brooks” (Music Row), the impressive feat marks the first time the duo has topped the album charts since 2009 while simultaneously earning the duo their 10th Billboard 200 Top 10 album, the most of any country duo or group in the chart’s history. The 12-track collection produced by Dann Huff “revisits some of the duo’s most iconic songs with the genre’s hottest young talents” (PEOPLE) including Kane Brown, Thomas Rhett, Brett Young, LANCO, Ashley McBryde, Brothers Osborne, Luke Combs, Midland, Cody Johnson, Jon Pardi, Tyler Booth and Kacey Musgraves.

“We always said that after all the crazy highs we’ve had along this journey, that the most important thing to us was that the music that held up over time,” said Ronnie Dunn. “To have a No. One record with these songs we love is wild and we’re so happy to have worked on this project with so many current talents. It is a testament to the power of collaboration.”

“These songs are so important to us, and we’re so thankful that they have had this chance to have new life breathed into them,” added Kix Brooks. “We had so much fun in the studio with everyone, it’s been a really special project for us.”

To mark the release, the next inductees into the Country Music Hall of Fame, Brooks & Dunn, took an “electrifying performance” (Billboard) of “Boot Scootin’ Boogie” with Midland to The Tonight Show Starring Jimmy Fallon, watch HERE and a “thrilling take” (Rolling Stone) of “Brand New Man” with Luke Combs to Academy of Country Music Awards, watch HERE.

With 20 No. One hits stretching back to 1991, two Grammy awards, dozens of ACM and CMA honors and a discography counting more album sales than any duo in history – regardless of genre – Brooks & Dunn’s influence on today’s country has never been in question. Hits like “Boot Scootin’ Boogie,” “My Maria,” “Only in America,” and “Believe” have propelled the duo to more than 30 million albums sold, with the New York Times heralding “together they helped drive the power-country era of the early-to-mid 1990s and continued to benefit from the sea change in the genre they helped initiate right through their most recent albums.” Their original “Merle Haggard meets The Rolling Stones” vibe made them progressive stars in their own right. In 2014, the duo announced their reunion along with long-time friend, Reba McEntire, for a residency called “Together in Vegas” at The Colosseum at Caesar’s Palace in Las Vegas, which received rave reviews and continues to be extended including more shows throughout this year. For more information visit: www.brooks-dunn.com. Follow Brooks & Dunn on Facebook: https://www.facebook.com/BrooksandDunn, Instagram:  https://www.instagram.com/brooksanddunn and Twitter: https://twitter.com/brooksanddunn.