Nashville, TN – Sept. 4, 2018 – Multi-PLATINUM entertainer Dierks Bentley and the world’s leading live entertainment company Live Nation ascended 8,000 feet for a seminal experience this weekend, launching the inaugural Seven Peaks Music Festival. Set against the heart-stopping mountain view of Buena Vista, CO, fans traveled from 49 states and as far as Australia, coming together for three days of one of the most-uniquely curated festival lineups this year. 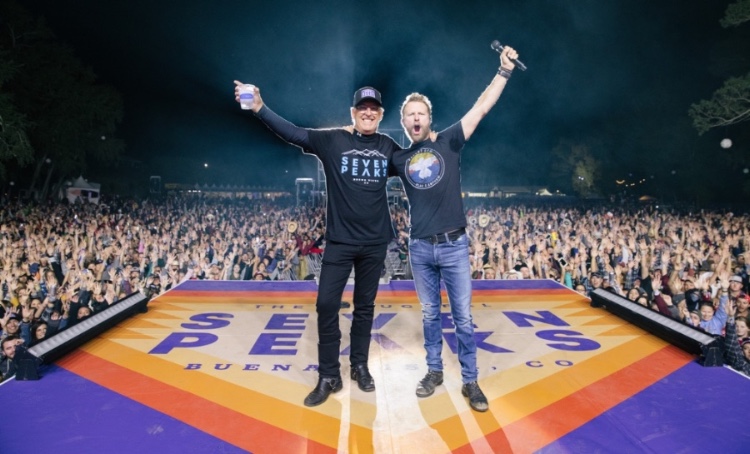 “It’s going to take a few days, maybe weeks, for me to process that Seven Peaks actually happened, and happened at the highest possible level,” said Bentley. “Everything about this journey was so special, from the initial seed of an idea, to the last song sung on Sunday night. I couldn’t be more proud of the team that came together to create this, and the fans that adopted the festival so quickly and easily, and have made it their own. Without a doubt I can say this festival is at the very top of any career achievements I’ve had.”

“It’s been a long journey to get to this day, when we can say the inaugural Seven Peaks Music Festival is under wraps,” said Brian O’Connell, President Of Country Touring at Live Nation. “We wanted everything about this festival to be unique and so that meant that no stone was left unturned. I’m so proud of Dierks, his team and my team for this weekend. From the vibe, to the setting, to the first-class music, it is one we won’t ever forget.”

Fans and artists arrived Friday, getting the first look at their jaw-dropping home for the next three days, with Forbes noting “what sets the festival apart is its location.” Bentley greeted campers as they arrived to the site, and as the first day of music began he spent the day hopping up on stage, joining Sawyer Brown for a crowd-raising rendition of “Some Girls Do,” as well as a special version of “Killing Time” with Clint Black.  With the vibe already set of a “community-first, play-every-set take on a country festival” (Rolling Stone) the festivities continued into the night with a special appearance by Bentley’s own Hot Country Knights and a late night DJ set by AYDAMN at the festival’s Whiskey Row Stage.

As the weekend continued, Seven Peaks Music Festival exemplified “authenticity in every component” (PEOPLE), with fans embracing all the additional adventures on offer, including white water rafting, zip lining and more, as well as Bentley joining fans for Saturday’s “Somewhere On A Beach Party,” a daytime gathering set within the campgrounds where fans could enjoy the “picturesque Rocky Mountain backdrop” (Billboard) while relaxing in the water. As a second day of music got underway, there was no shortage of memorable moments with Bentley taking the stage with Whiskey Row Stage artist Rapidgrass, and main stage artists Kiefer Sutherland, Sam Bush and Brothers Osborne. Headliner Miranda Lambert brought the night to a close with a hit-filled set, sparking hair-raising sing-a-longs as the community momentum of the festival hit its stride.

On Sunday, fans settled in for the much-anticipated finale of the weekend, starting the day in their campsites and enjoying the friendships made with their fellow campers. With standout performances across the day on both stages, Bentley took the stage for his headlining set to a staggering reaction. Bentley invited many friends to join him for his full-throttle set including LANCO’s Brandon Lancaster who hopped up on stage for John Michael Montgomery’s “Sold,” while Trombone Shorty accompanied Bentley on “Mardi Gras.” Elle King returned to the stage for “Different For Girls,” who also joined Bentley, The Travelin’ McCourys and Trombone Shorty for a special spin on Johnny Cash’s “Jackson” and Avicii’s “Wake Me Up,” closing out a memory-filled Labor Day weekend.

About Dierks Bentley:
Reaching a new creative high, Bentley co-wrote 10 of THE MOUNTAIN’s (Capitol Records Nashville) 13 tracks, which earned him the highest debut sales  of his career and became his seventh chart-topping album and has been touted for its “quality music with depth and sincerity” (NPR) ranging in style from textured rock to acoustic folk. This year’s three-time CMA nominee has amassed nearly five  billion digital streams, countless nominations from the  ACMs, Billboard Music Awards  while earning 13  GRAMMY  nominations – including at least one stemming from each of his last six albums. Continuing endeavors outside of the music industry Bentley has partnered with Flag & Anthem to create an exclusive lifestyle collection, Desert Son, available now. He continues to host capacity  crowds throughout the summer on his 2018MOUNTAIN HIGH TOUR and for more information and tour dates visit www.Dierks.com.