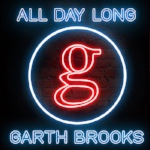 Nashville, TN – June 25, 2018 – Reigning CMA “Entertainer Of The Year” Garth Brooks’ recently released single, “All Day Long” is the most-added song at Country Radio this week and also claims the biggest add date since August 2015. The track debuted at No. 21 on Billboard and No. 28 on Mediabase chart.  “All Day Long” is also available to stream on Amazon Music here and is proving to be an instant hit with critics, as USA Today declares “Brooks’ distinct voice is instantly recognizable then bolstered by the familiar combination of fiddle, steel and electric guitar – the song a fresh, but welcome rewind to the hard-driving, blue-collar country Brooks popularized in the 90’s.” Co-written by Brooks with Bryan Kennedy and Mitch Rossell, the instantaneous track follows the momentum of his recent No. One “Ask Me How I Know.” “All Day Long” is the first track taken from Brooks’ upcoming studio album to be released next year.

Garth Brooks is the reigning CMA Entertainer of the Year, having now been awarded this honor six times, a first for any artist. He is also the first artist in history to receive 7 Diamond awards for the now seven albums certified by the RIAA at over 10 million album sales each and remains the #1-selling solo artist in U.S. history certified by the RIAA with over 148 million album sales. He has received every accolade the recording industry can bestow on an artist. Garth has been inducted into the International Songwriters Hall of Fame in New York, the Nashville Songwriters Hall of Fame, Country Music Hall of Fame and most recently, the Musicians Hall of Fame. Garth just finished the three and a half year long, Garth Brooks World Tour with Trisha Yearwood. Forbes said of the tour, “Garth Brooks’ World Tour Solidifies His Status As The Best Arena Act Alive.” The tour smashed records previously held by such acts as The Beatles, The Rolling Stones, and even Garth Brooks. The tour played 79 cities, 390 concerts with over 100,000 tickets sold in over 20 cities. The tour sold over 6.3 million tickets, making it the biggest North American tour in history and the biggest American tour in the world. Garth also has Inside Studio G, a weekly Facebook Live series. It airs every Monday on Garth’s Facebook page at 7:00 PM EST. You can follow him at https://www.facebook.com/GarthBrooks,  https://twitter.com/garthbrooks and http://instagram.com/garthbrooks  For more information please visit www.garthbrooks.com.